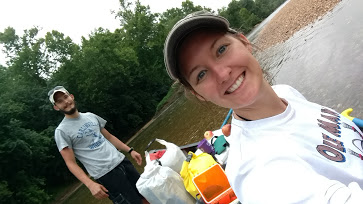 I love camping!  I also have wonderful childhood memories of canoe trips with my family.  To me camping and canoeing go together like Frodo and Sam, together you have a better adventure!  Having a holiday coming up, I was excited to plan an overnight canoe trip with my husband for the 4th of July Weekend.  We both have experience canoeing and camping, but it was Casey’s first time camping out along the river.

We decided to canoe the Buffalo River in Arkansas.  We chose Buffalo River Outfitters for our canoe rental.  The water level was rated as moderate.  We would put in at Baker Ford on Sunday, July 2nd and come out on Monday, July 3rd at South Maumee.  The total distance we would travel on the Buffalo River was 21.8 miles.  We planned for an afternoon pickup, but they informed us that there usually isn’t any cell service at South Maumee.  We would need to call Buffalo River Outfitters when we reached North Maumee to give them a heads up we were almost finished and to ensure they would have someone at that location to pick us up.

Once we had our trip scheduled we started checking the weather and planning what to pack. We would not need to portage, as the whole trip would be along the same river.  There were scattered thunderstorms for the area, so we would have to plan accordingly.  We purchased some waterproof bags to ensure all our equipment and supplies would stay dry.  Here is a list of the items we brought:

We decided we did not want many perishable goods.  My husband made scrabble (basically a type of trail mix) and muddy buddies (aka puppy chow).  We also had muffins as a quick and easy breakfast.  We did bring some fruit: watermelon, apples, and cherries. For lunch/dinner we decided on making hummus quesadillas.   It’s quick, easy, and delicious!

We brought along our dog with us, Yavanna.  So we made sure to pack her PFD (doggy life-vest), leash, food and her collapsible dog bowl.

As part of our trip we planned on camping one night in the Ozarks on Saturday, July 1st (you can read about it HERE).  We drove up to Arkansas from where we live in Louisiana.  We did have poor planning with navigation because we relied too much on our phone GPS.  We quickly found out that rural areas of northern Arkansas were not covered by our cellphone carriers.  Luckily I keep a Magellan GPS in my car for emergency purposes, which came in handy for finding our way to the Canoe Rental.

We arrived later than planned, but still put in at Baker Ford around 10:00 AM on Sunday.  We already had everything packed in the dry bags and cooler, so it was easy to load the canoe and get started.

Sunday had showed a 20% chance of rain.  As we departed there was nothing but sun! The water was the perfect temperature.  The day was warm, and we took frequent dips in the water.  The river flow was a good pace, we didn’t have any trouble with rapids.

We came across some commotion on a rocky riverbank around noon.  There were many canoes and kayaks parked, and everyone seemed to be watching the cliff side.  There was a rope swing tied to a tree.  Casey and I decided to stop and give the swing a try.

We sat on the bank across from the swing while waiting for a turn.  There were other people and dogs parked on the bank where we sat. There were two large Bernese Mountain dogs that came barreling over to meet us.  Yavanna was a little nervous to be around such large dogs, she stood on the cooler in the canoe while they were around.

When a group was swimming back to our side, we had to swim across the river to get to the swing.  We tried to call Yavanna over while we swam, but she stayed on the other side of the river.  She was feeling friendly and started mingling with other people.

Casey went off the swing first.  I was nervous to go up.  The tree had thick stakes in the side that were to be used to climb it.  Once I got up there I noticed that the handlebar attached to the rope had a foam grip, which made it easier to hold on to with wet hands.  After I went and came up from the water I noticed that Yavanna was swimming across the river to the our side.  I guess she heard me fall into the water and wanted to check on us.  On our way back to the bank with our canoe some people commented on how she seemed nervous about me, and that she was a good swimmer.

Later, we came across a second rope swing, which was also attached to a tree.  However, you did not have to climb the tree to swing.  The bank was much higher than the river, so you could stand from the bank into the deep water.  Casey managed to do a back-flip off the second rope.

Casey and I had not previously canoed the Buffalo River.  We were unsure of what we might find.  We hoped to see a trail, or come across a waterfall or cold spring.  We stopped at one location where we thought we might find a cold spring.  Following the path it looked like it was just a creek, but we made two acquaintances along the way.  They chatted with us for a bit and we learned of some local trails to hike. 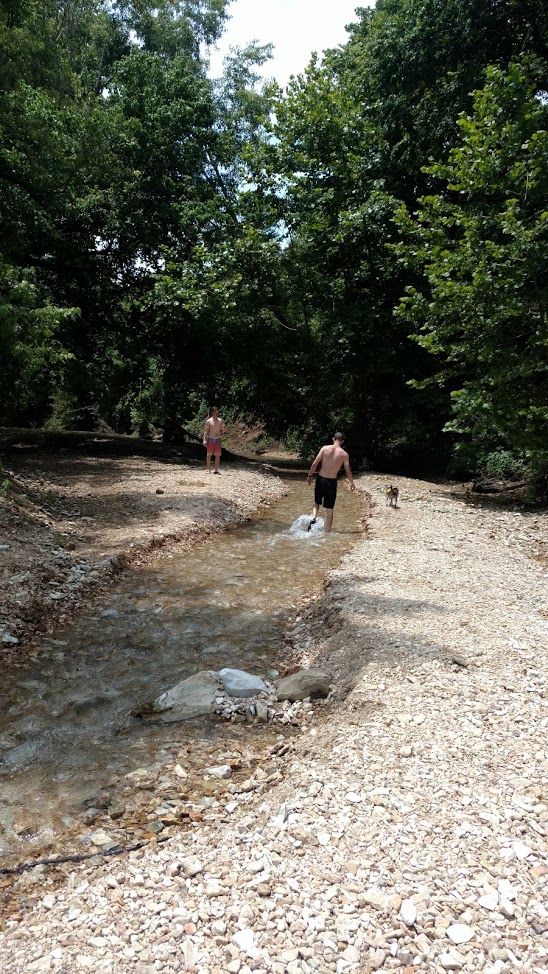 We didn’t stay long and were back on the river.  After a bit of canoeing we came across some park rangers standing on the river bank.  They were checking to make sure people were following the river rules (no glass bottles, everyone has a PFD, if fishing you need your appropriate license).  We had no issues with them.  It made me happy to see that the Buffalo River was well taken care of.  Casey and I both noticed that the river was exceptionally clean. We learned later that cleaning crews are sent out every month to pick up litter and trash from the river.

Later in the evening we had managed to pass Gilbert, which was estimated to be the halfway point (about 10 miles).  It was a little after 4:00 PM, so we said we would coast until about 5:30, then find a spot to make camp.

I had a lot of fun finding the “perfect” camping spot with Casey.  We would stop at a bank and look around to see if we wanted to stay there.  We eventually picked a rocky bank with some soft, sandy patches.  I had collected some dry wood along the river to make a fire.  The sun was still shining as we made our camp.  We knew that there could be rain later, so we made sure to put up the tent cover. 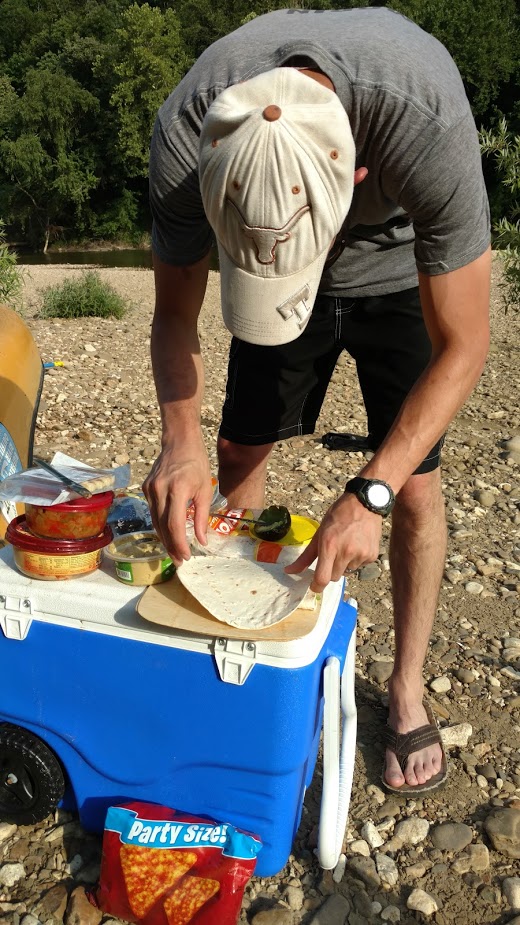 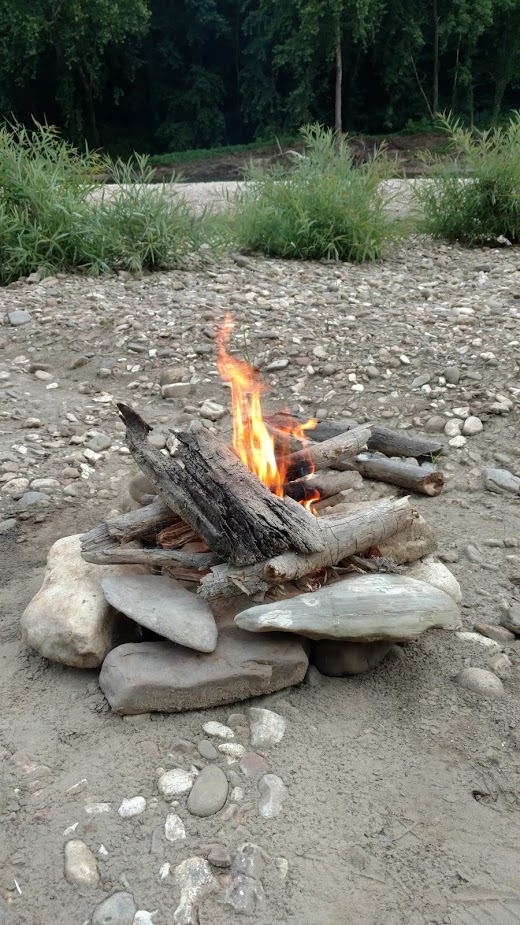 After setting up camp we made dinner, but by then Yavanna was completely wore out!  She is a great dog to take on adventures.  She likes to explore just as much as us.  She also has the perfect temperament for being around people.  A little standoffish, but can quickly warm up to people and other dogs.

After dinner we sat and enjoyed the fire for a bit before calling it a night.  We brought the canoe up from the river bank and packed all our gear inside our tent with us.  It did end up raining that night.  I woke up from the sound of thunder a couple times during the night.  It was sprinkling when we woke up the next morning around 6:00 AM.  We enjoyed breakfast in our tent while planning the day.

We had everything packed up and were ready to start canoeing again around 9:00 AM.  It was still cloudy, but we enjoyed the overcast.  We may have been a little sunburned from the day before.  (Lesson learned: continually re-apply sunblock!)

The river became a little wider and much deeper as we progressed.  The hills also rose and exposed rocky cliffs.  It was beautiful!  We managed to see more wildlife on the second day, which I believe was because there were fewer people on the river.

We saw many different kinds of birds.  I wish I would have brought my bird field guide on this trip.  We witnessed a blue herring fishing, but it didn’t manage to catch its’ breakfast while we were watching.  We also saw some duck and ducklings, and some turtles.

As we progressed on the river we came across another cold stream.  We stopped to see how far back it went.  Still hoping to see a waterfall or cold spring down the path.  The ground was very muddy, and we did not go very far back.  It was pretty to look at though.

Eventually we did find a waterfall, though not quite what we had imagined.  It was a small run off from a hill.

Later in the day, near noon, we came across some kayakers who were also camping overnight on the river.  When we passed them they were fishing in a deep curve.  They were halfway through a multi day stint.  Casey and I started chatting about future plans for a multi day canoe/camping trip.

The clouds cleared near the end of our journey.  We reached North Maumee around noon and called Buffalo River Outfitters to let them know they could probably expect us at South Maumee around 1:00 PM.  It was not much father to South Maumee.  If we had not seen a truck already there to pick up another group we might have missed it. The sign was high on the bank and almost covered by tree limbs.

We had a blast on the river, camping and canoeing.  It is definitely something we would like to do again, and maybe even add on a few days.  Eventually I would like to try portaging.

One thought on “2 Day Overnight Canoe Trip on the Buffalo River, AR”