Casey had done some research on the Poor Knights Islands, and mainly was interested in the islands because of the Giant Weta that live on them.  These islands are 23 kilometers off the New Zealand Tutukaka coast and are a Marine and Nature Reserve (which means you cannot go onto the islands).  The waters around the islands are available for people to boat around, and there are some options you can find that will take you out for a day trip.

We had made an attempt to drop in on our way north, but it was fully booked.  We ended up getting a reservation for after we finished our trip up in the Northland, reserved for when we would be making our way back down south.

Using the Campermate app I found a camping spot near Whananaki South to park for the night. It had recently opened a few spots to vans like ours (NSC: non self-contained) and we were lucky to snag a spot with a great view!

We enjoyed looking out at the boats parked in the Whananaki Inlet.  We has some mice conversations with our neighboring campervan mates while cooking dinner, and fell asleep to the sound of the waves.  It was lovely!  The next morning was our trip out to the Poor Knights Islands.

We booked out trip with Perfect Day.  The trip included the ride out to the islands, all the gear for snorkeling, wetsuits, kayaking, stand-up paddle boarding, lunch, and hot showers.

Upon boarding the boat we were fitted with we suits and snorkel gear.  Then allowed inside to sit wherever we felt comfortable while everyone finished boarding and the crew got ready for departure.

The boat ride out to the islands are about 20-30 minutes.  The crew was entertaining, and there are plenty of reading materials of all the potential marine life you could spot along the way, as well as what marine life you may spot while snorkeling.

As we arrived near the islands, the skipper came over the intercom to give us instructions.  There were other boats in the area that had other snorkelers or scuba divers.  We were given some additional safety instructions and then allowed to leave the boat and begin exploring.

I knew the water would be a bit chilly, so we jumped right in to get the initial shock out of the way.  I was thankful for the wet suit, as it helped keep me warm and I was able to stay in the water for a much longer time.

We snorkeled over the reefs and I began to see fish appear.  There were two caves that had been pointed out to us.  One opened on the side of the island and had a lot of light shinning in.  Casey and I swam our way over to the cave.  I managed to find some courage to swim inside and I am so glad I did!  There was an unbelievable amount of fish inside the cave!  We dove underwater.  Looking out of the cave towards the light was a breathtaking view.  It was beautiful and serene.

One of the crews photographers came by and tried to capture a photo of Casey and I under the water in the cave.  I was happy for her to take our picture, even though Casey and I were a bit uncoordinated while under water.

We eventually swam out of the cave and back towards the boat.  I wanted to rest and grab a some lunch.  The crew had been placing the food on the buffet.  We ate hot soup, some sandwiches, and fruit. I also made a cup of hot chocolate and sat on the lower deck to sun bath a bit before we went back to swimming.

Casey and I wanted to snag a stand-up paddle board, but none were available yet. So we went back in the water to snorkel.  Casey suggested we go visit the second cave.  We saw in the opposite direction as the first.  This one was under an arch.  The waves were a little more rough on this side.  There wasn’t as much light getting into the cave either, because of the shadow from the archway.

Casey and I swam in, but did not stay long.  It was far darker and the rough waves echoed in the large chamber.  It was an eerie sound.

After swimming out of the cave, we slowly drifted back towards the boat.   We ended up back at the boat as a stand-up paddle board became available.  Casey and I shared it and took turns paddling.  We were able to get up close the the island cliff side.  There were little crabs scattering along the walls.  No weta, to my husband’s disappointment.

The horn was soon sounded, concluding our water activities.  Everyone made their way back to the boat, returning gear and wet suits.  The water roll was the last item to be collected, and one of the crew members convinced me and my husband to do one last run on it out into the ocean.   The water was way colder without a wet suit!

As everyone got settled on the boat, were were told we would cruise a little around the island before heading back inland.  We first were taken into the largest sea cave by volume in the world, called Riko Riko. 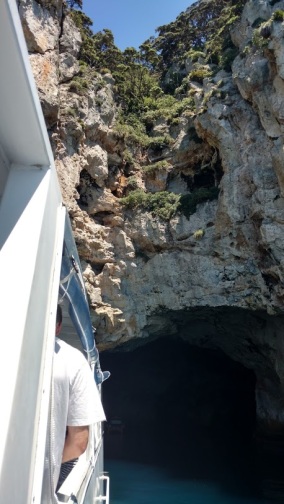 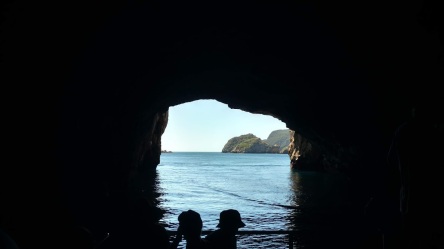 The skipper parked the boat inside the large cave.  We played with our voices to test the accousitcs.  The skipper also gave us some interesting facts about the cave, like how a dead sperm whale had washed up in the cave and the smell had made it horrible to enter for a time.  The bones of the whale are still at the bottom and scuba divers can go down and look at them.

We exited the cave and the skipper continued to cruise around the islands, looking at the archways.  The skipper told the history of the Poor Knights Islands.

After our tour around the islands, the skipper guided the boat back to the Tutukaka coast of New Zealand.  I took advantage of the hot showers available on the boat while we made the trip back.

It was a beautiful, sunny day for our excursion. The crew was very entertaining and made the day really fun! Casey and I were so happy we decided to pay the money for this trip.  It was a beautiful location and having that experience swimming and playing in the ocean was worth it to us.